Seminal analysis is a basic test to evaluate semen quality which helps reproductive endocrinologists to examine the cause of male infertility.

The test is recommended for

*Seminal Analysis is only used to evaluate basic criteria of semen quality. If fertility evaluation is required, you should consult reproductive endocrinologists for a comprehensive check-up and assessment, including medical history, physical examination, genitourinary system examination, endocrine examination etc.

What does the test result mean

The percentage of moving sperm in a sample is known as its ‘motility’. The more slowly moving or immobile sperm in a sample, the less likely it is that a man could conceive a child with his partner. The progression of the sperm is rated on a basis from zero (no motion) to 3 or higher for sperm that move in a straight line with good speed. If less than half of the sperm are moving, a stain is used to identify the percentage of dead sperm. This is called a ‘sperm viability test’.

Morphology analysis is the study of the size, shape, and appearance of the sperm cells. The analysis evaluates the structure of 200 sperms, and any defects are noted. The more abnormal sperms that are present, the more the likelihood of infertility.

Some of the common causes of male infertility are extremely high fever, testicular failure (failure of the testicles to produce sperm), obstruction of the tubes that carry semen to the penis, and a less than normal amount of sperm in the sample (oligospermia).

Normal Structure of a Sperm 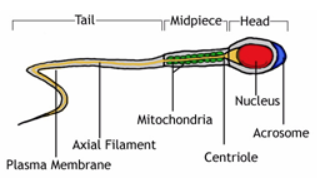 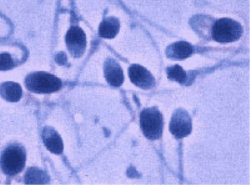